Tricks are small automations and integrations in jestor. You can make a trick with just a few clicks, it's really fast and there's no technical knowledge required.

The most important thing about a trick is understanding its conditions and actions. They have a simple generic structure:

When condition (trigger) happens, then do (action).
Trigger -> Action

Exemple: When a purchase is approved, send a Slack message to the person that created the request.

Conditions
Conditions are triggers that start an action. When the conditions you laid out are true, it'll start the automation that you want.

Example of a generic condition:

Actions
Actions are the automation itself. They are what you want jestor to "do" for you. So, once the conditions are met, your action will happen.

To illustrate how tricks work, we'll create a simple, but very useful automation. Let's think of the following process:

So, in essence, we have the Leads flow: 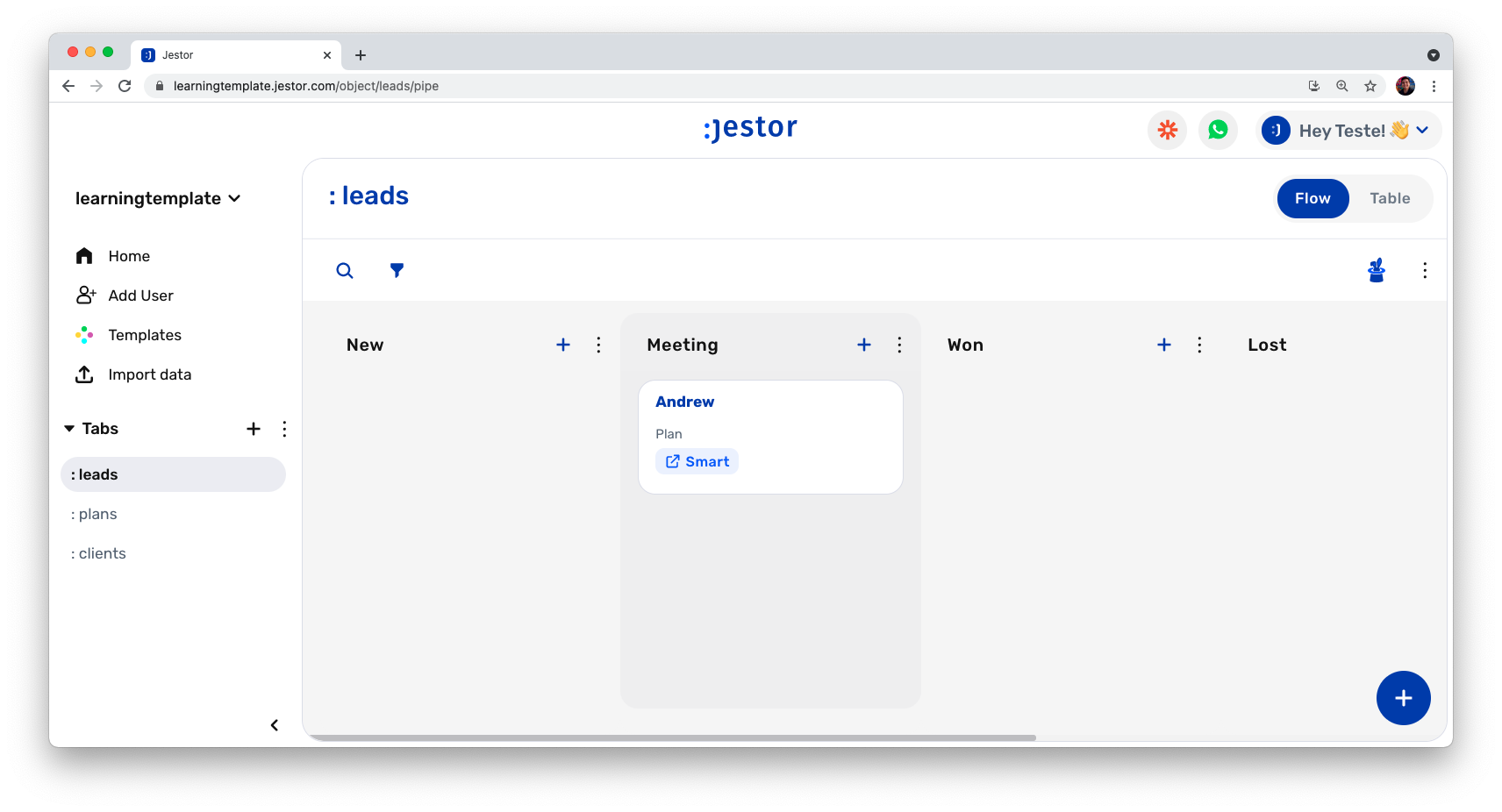 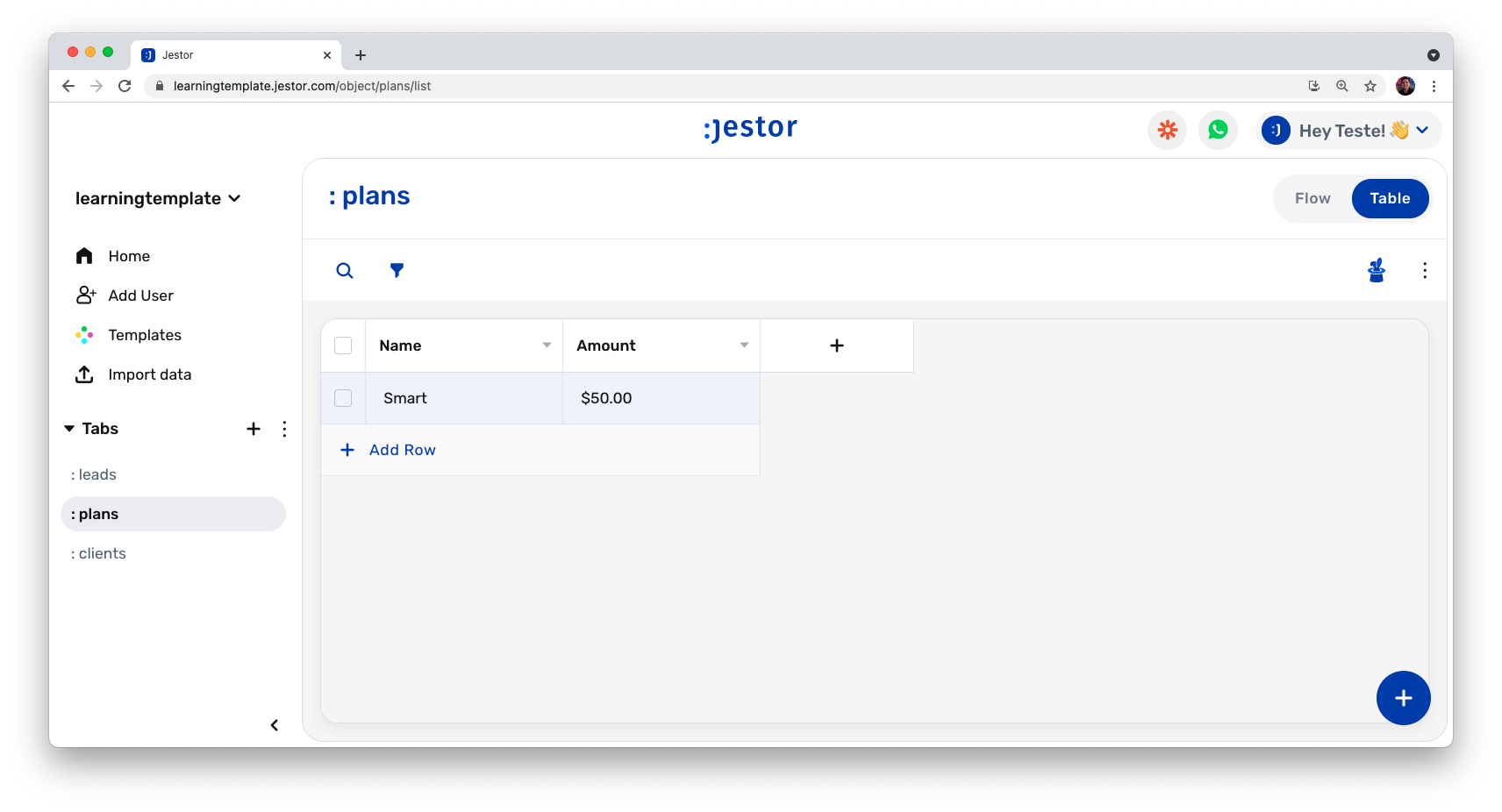 And the Client's table: 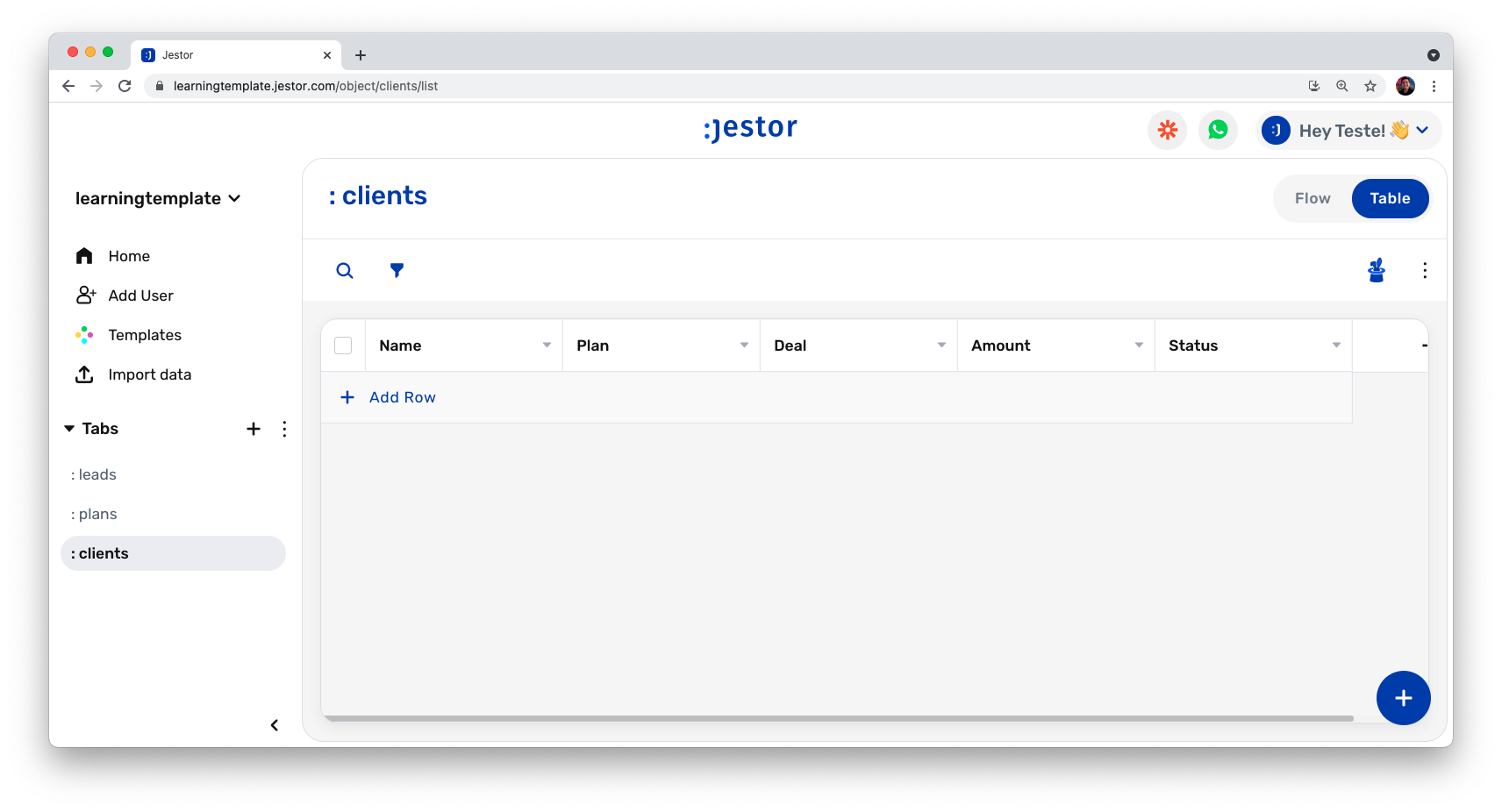 Now, let's create the Trick! We just have to click on the Bunny icon on the right side of the screen:

This will open the Tricks panel, and we just have to click on + Create new trick to start! 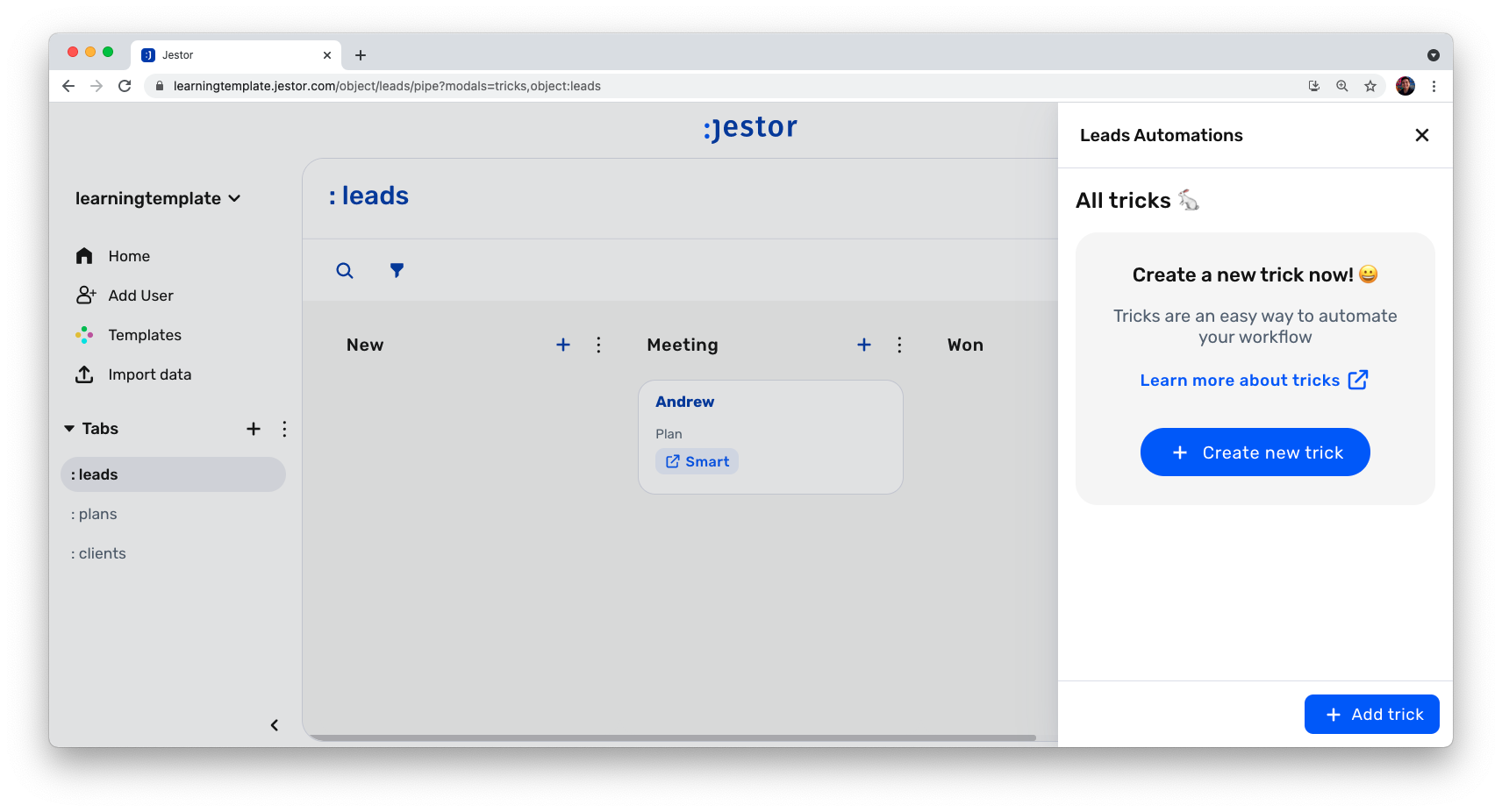 So, when we think about it, we can sum up our automation as:

When a record is updated in Leads and reaches the status Won, create a record in Clients

So, after naming and describing our Trick, we'll choose the trigger When a record is updated in Jestor. 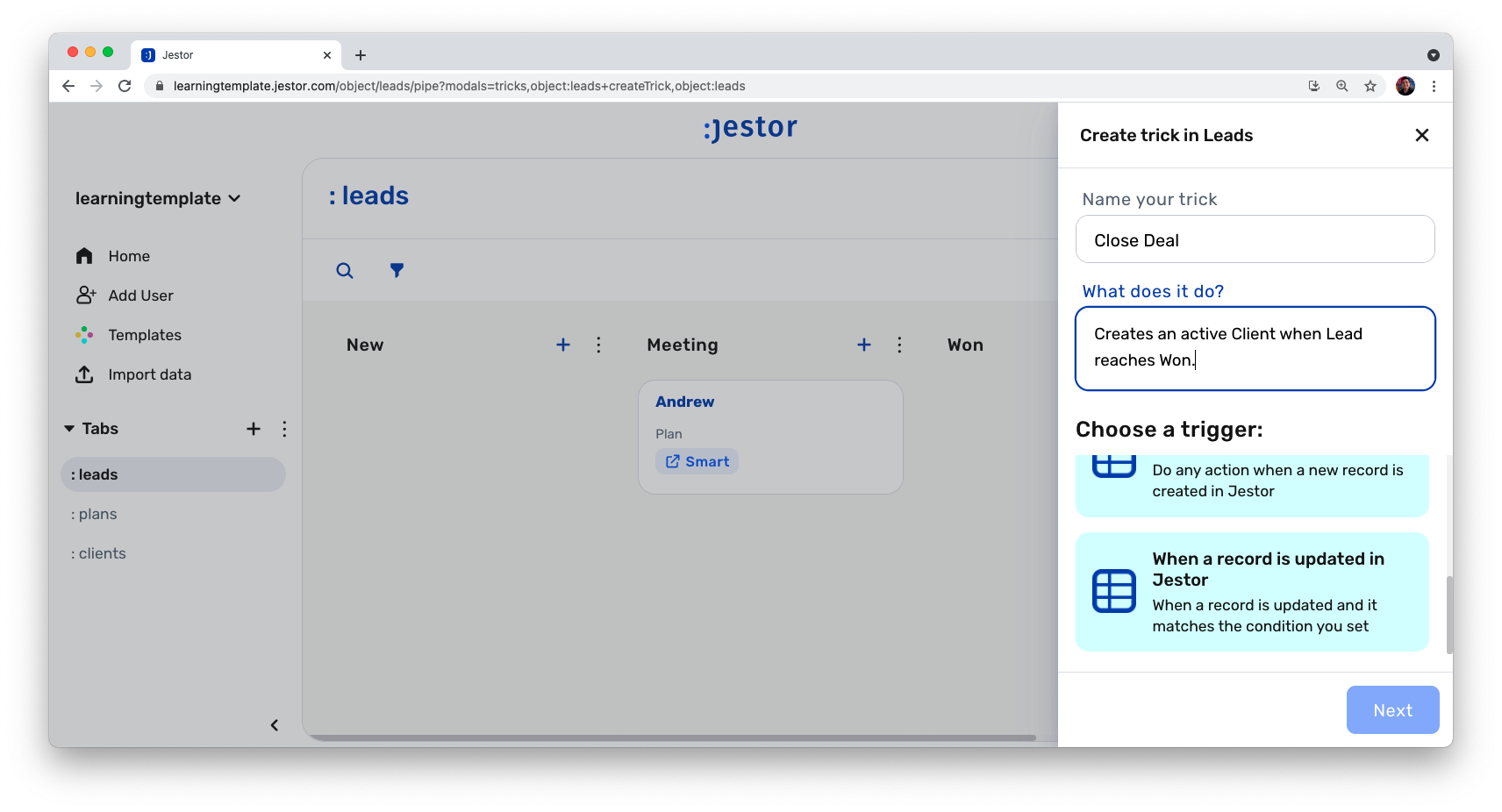 Then, we'll set up the conditions. In this case, we'll select the table Leads and set the automation to run when the field Status reaches "Won". 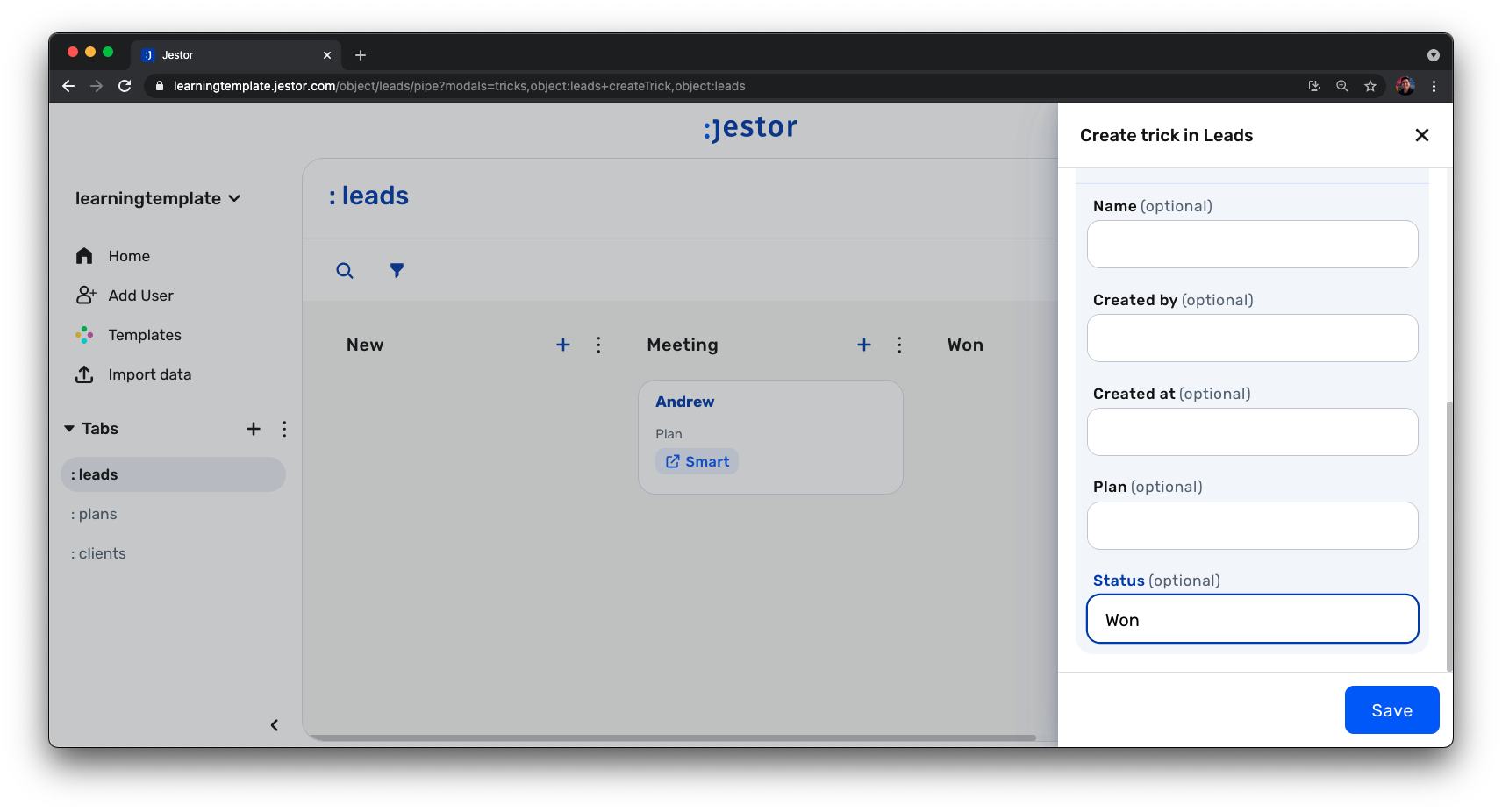 Now, we'll click on + Create New Action to set up our action. 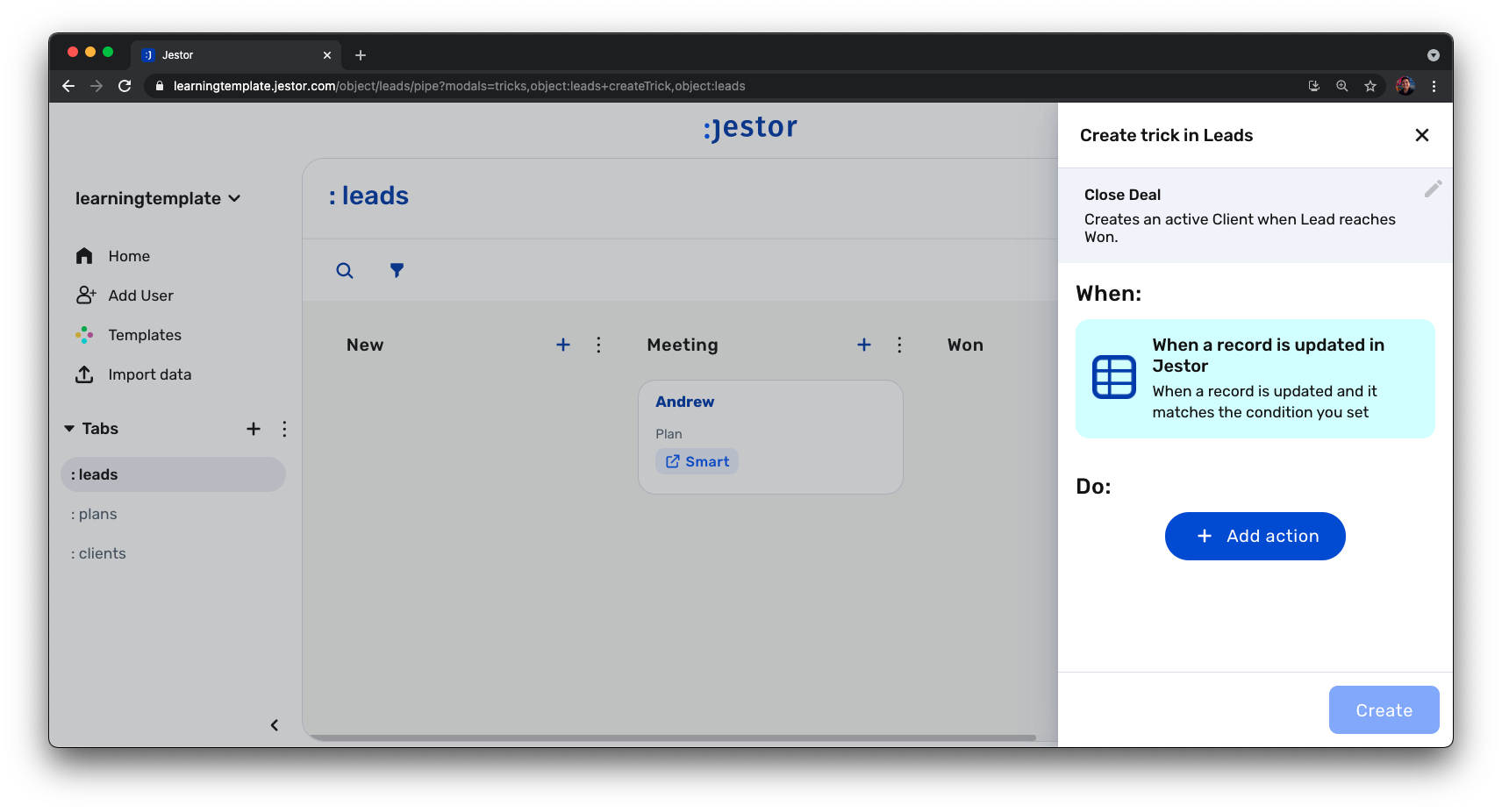 Which, in this case, will be Create a new record: 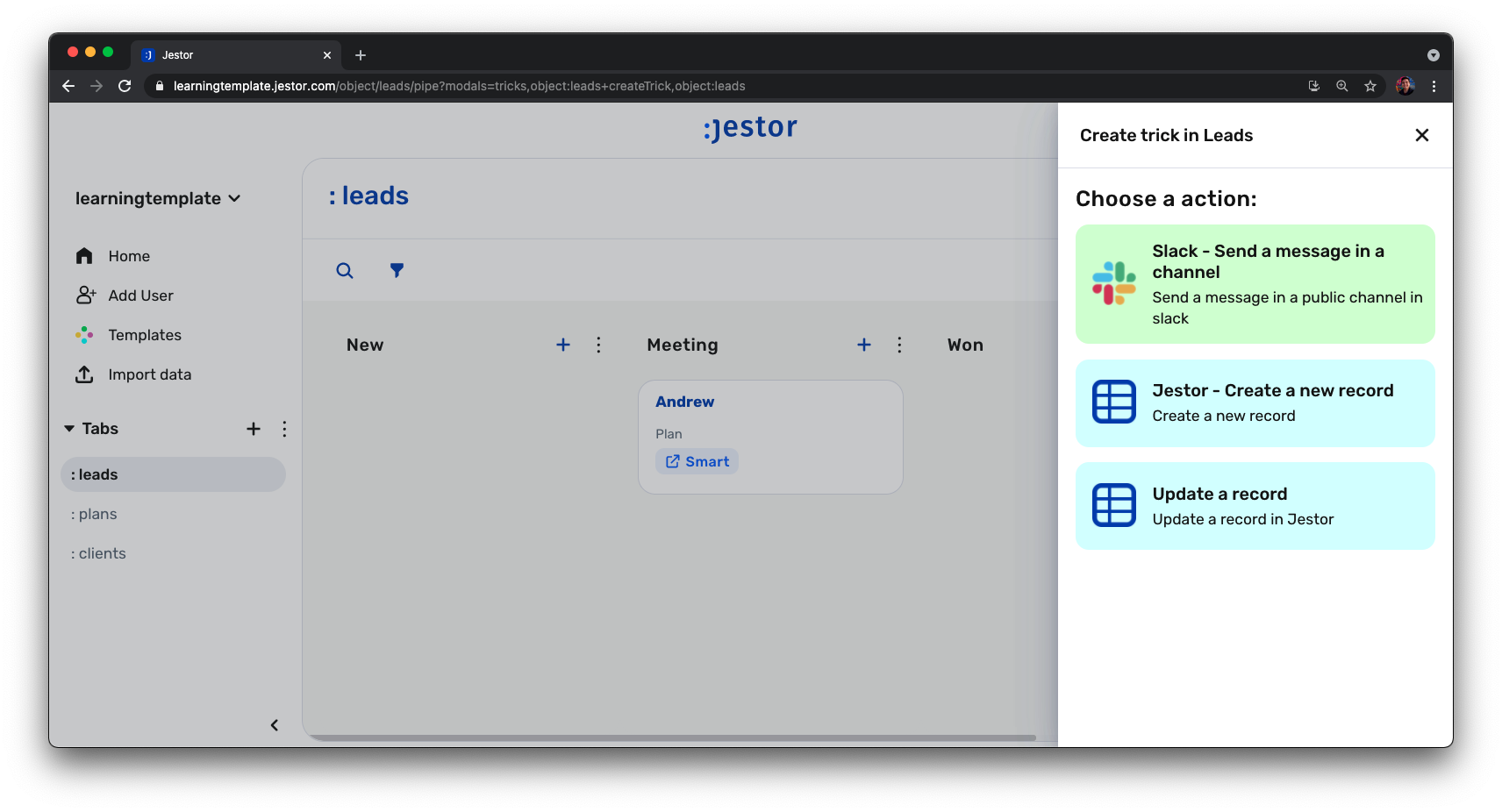 Now we just have to choose the table (in this case, Clients) and populate the fields with the values we want. We can write directly on each field, or click on them and choose a value from the original Leads record or other records it is related to (such as the Plan from the deal). 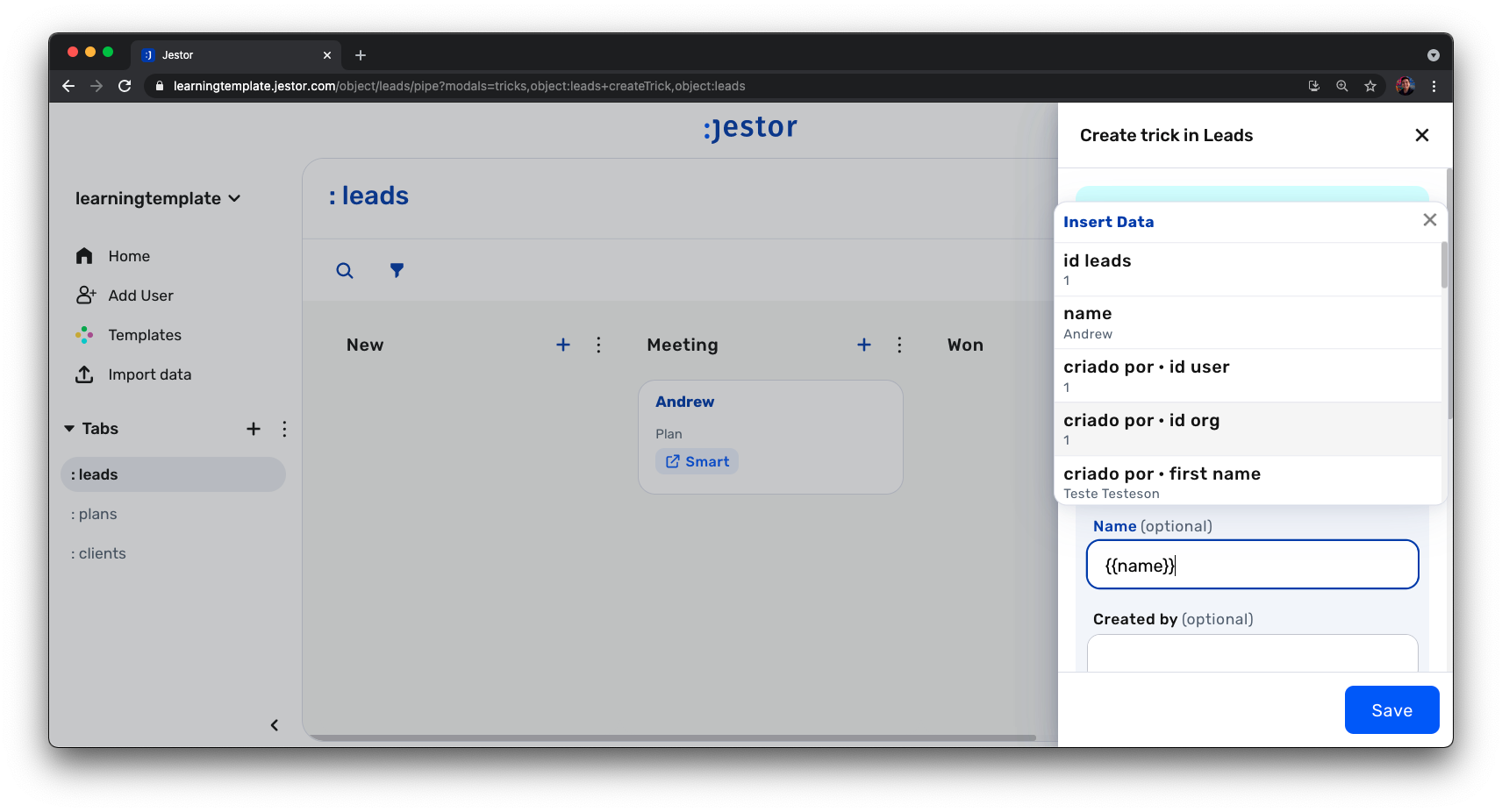 Now we just hit save and the trick is created! It'll be on the Tricks panel, so we can edit it later if we want to, or even deactivate it. 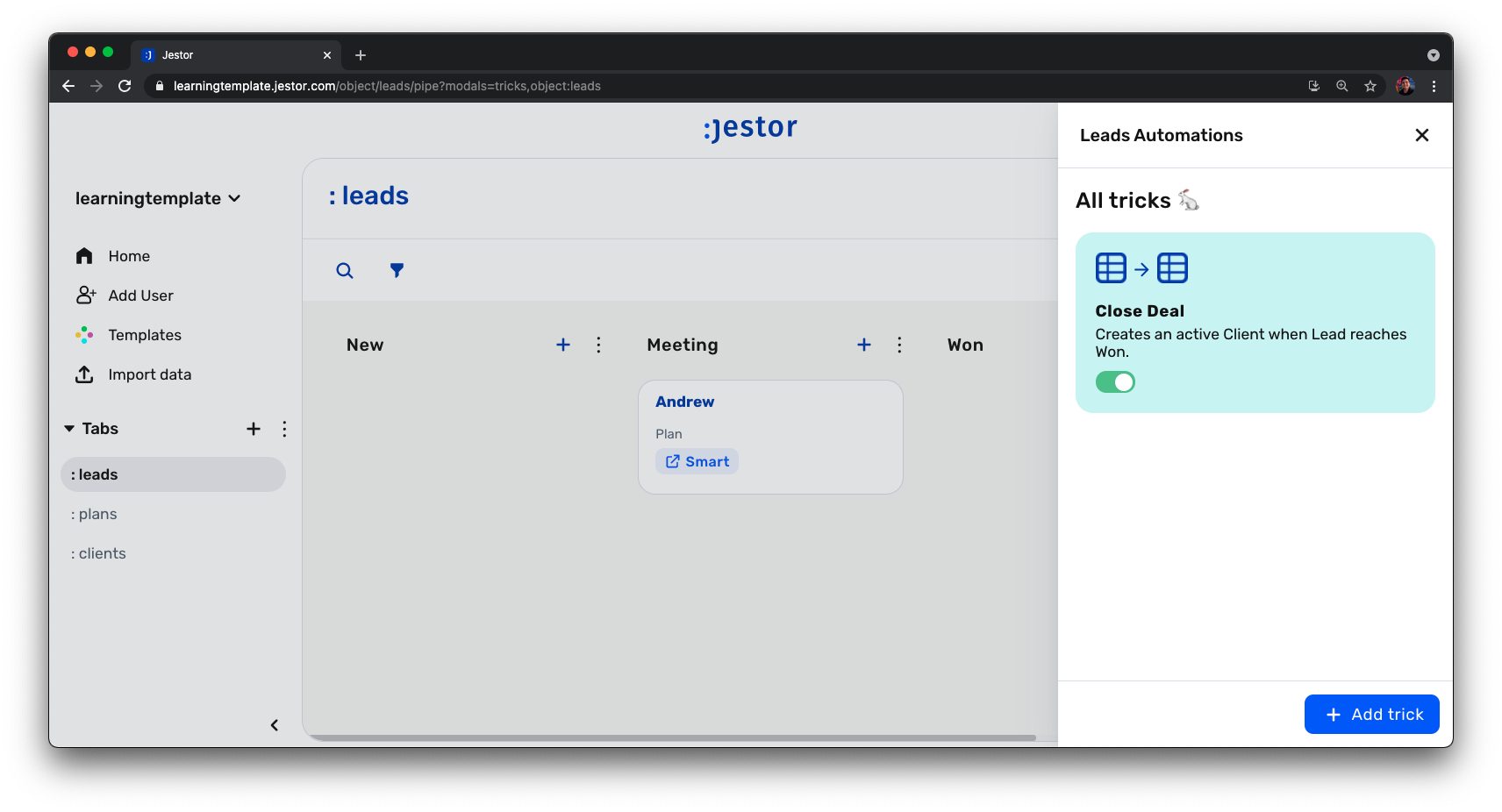 The final result is this:

This is only the beginning! There are more triggers and actions you can use on your automations, and you can even do *more than one action per automation. Use them well and see your processes run smoother than ever before 🚀

In the action fields, you can not only choose from values of the record that triggered the automation, but concatenate values and text to create customized messages!

For example, setting this up:

And adding a lead named Andrew will create this record:

This is particularly useful for notifications or reports when sending Slack messages or emails.

Some fields are really easy to understand. A short text field will take anything and treat it as text, and a number will always take numbers.

However, some fields can be a little tricky to understand at first. Don't worry: we got you covered.

We're constantly adding new triggers and actions to our repertoire. Be sure to check them out every once in a while: some of them might be just what you're looking for.